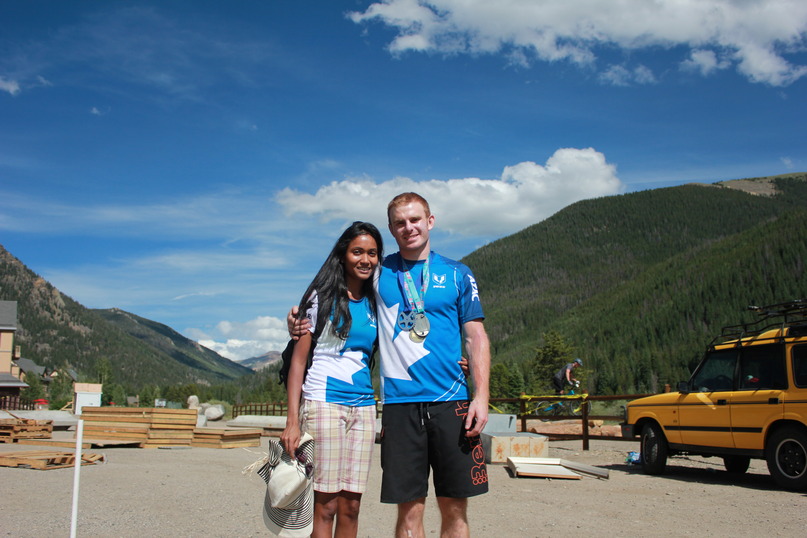 Jeff Anderson grew up in Coquitlam BC and started riding cross country mountain biking, with SPOKE, in grade 6. In grade 7, he was influenced by Ryan Leech demonstrating trials and decided to start trying to ride bike trials. He was lucky to have a community of trials riders in his area, with the Canadian Pacific Trials Association hosting bicycle trials events along with motorcycle trials. In 2001, Jeff was among a group of riders that influenced the construction of the Port Moody Trials Park, the first bicycle trials park in North America. In 2004 Jeff was invited to be a part of the TrialsinShop Demo Team. He joined fellow riders Steve Dickin, Dylan Korba, Ryan Lynne and Dave Herr. After performing many shows, Jeff joined Steve to create the Trials Stars Demo Team in 2007. Since then, The Trials Stars Demo Team has performed hundred of shows for thousands of people in Canada. In 2008, Jeff was invited to Shanghai, China to compete in a BIU Masters Cup for his first overseas competition. He managed to make it into the finals. The top four included Peter Bartak, Kazuki Teri and Dani Comas. Jeff ended up crashing on the barrel section spraining his ankle. He finshed the race but ended up 4th place. While recovering from his sprained ankle back home, Jeff worked with Sheldon Person to create a film short "Regaining Balance" where Sheldon follows Jeff on his road to recovery to compete in the 2008 UCI world Championships. At Jeff's first World Championships in Italy, 2008, he placed 28th overall. Jeff was not happy with that result and teamed up with Simon Fraser University's strength and fitness coach, Derek Hansen. Derek's fitness plan increased Jeff's power substantially. The next year Jeff placed 16th at the World Championships in Canberra, Australia. Jeff continued to work with Derek until he graduated from SFU in 2011. Jeff took a break from international competition in 2011 and started to work at an engineering firm, Broadcom, as a Software Engineer. He returned to international competition after getting married to his lovely wife Dona and moving to Cambridge UK for work. He while in the UK he competed in the UCI Trials World Cup for the first time and finished 17th overall in the series. He placed 16th at the World championships in Norway. His position at Broadcom ended and he returned to Vancouver, Canada. In 2015 Jeff returned to Europe to compete in the World Cup and Championships. He had his best result in Vocklabruck Austria where he placed 11th in one of the World Cup events. He finished 14th overall in the World Cup series. At the World Championships in Andorra Jeff was disappointed with his 20th place finish. In 2015 Jeff also traveled to Keystone, Colorado and won the NATS North American Trials Championships. Jeff continues to train hard, promote cycling in Vancouver, Canada.